Day 1 in Montreal (that’s in Canada)

Moms:  We made it here, customs was a breeze…

We started out our day with breakfast, obv.  So far the only thing I don’t love about the B&B is that, well, they have breakfast for you and I really like going out for breakfast.  Augusta made us french toast with fresh fruit and yogurt, orange juice, cranberry juice and coffee.  It was actually awesome.

After breakfast we started our jouney.  We seriously walked from 11am until 6pm.  A few blocks into our journey we spotted 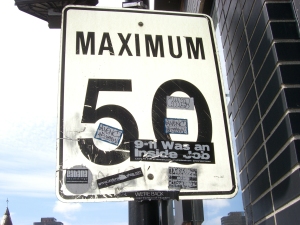 and from there on we knew we were in good company.

Our first stop was the Basilica.  Everyone said this is a must

Seeing the Queen and all her glory really made us hungry and thirsty for that matter.  So we stopped in at Nyk’s

To work off our late lunch we did some shopping along Rue Sainte Catherine.  Tons of boutiques and other things that typically straight men go see at night with their buddies can be found along Sainte Catherine.  We had heard that Radiohead was playing in Montreal tomorrow night so we thought we better get some tickets.  But where?

We stopped in at one of the tourist information spots.  This place is brilliant.  You get a number and when your number is called you can ask all the questions you have like where do we buy concert tickets and by the way where is said concert being held and how do we get there as well as questions like where is the train station and how would you suggest getting from Montreal to Quebec City.  There were 15 windows of question raising tourists.  I loved it.   This information center would impress many a library staff!

So obviously when in Montreal it is most important to visit the Grande Bibliotheque du Quebec (Quebec National Library).  OMG this place is beautiful and rather large.  They provide so so so many services.  I picked up several brochures, what I will do with them, I have no ideas, probably pull them out in job interviews or something.  However, the sign on the outside said no cameras (at least we think that is what the French sign read).  And PS there was not a single sign outside designating the building’s name.  However, since we were not sure if the sign said no cameras or just no flash…here are a couple of images from the outside 😦 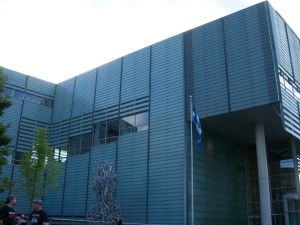 So, I would give this first day two thumbs up.  And obv., its not even over.  We have dinner reservations at a vegetarian restaurant in the Gay Village where the “waiter [is] in fishnet stockings, aluminum paper walls.  Some what fanatic…”  Right on, aye.

One Step Closer, not really

Nancy Pearl has not hooked me up yet.  I may have to do this action figure thing on my own.

http://www.be-a-doll.com/ may be a resource I utilize in accomplishing my goal of having my own librarian action figure.

Today at the suburban library near I94, there was a little bit of experimenting going on with some new software.  Marty and I were volunteers for testing some new software the library had recently acquired.  I know you are all familiar with the Read posters produced by ALA.  Well as part of the summer reading program a library I know is going to be making a few posters of participants in the reading program as prizes.  So Marty and I had our major photo shoot today.  Please, please get some popcorn ready and check out the beauty below:

Marty’s Shinning Moment.  Stone Fox, its the name of a book.

Marty, really took control of the situation.  Quite the pro!  Everyday should start this way.  Obv.

Well, I hope you didn’t check your watch too much.  And I hope you noticed how professional the photographer was.  I guess he does this type of stuff all the time.  This is pretty exciting, I am so excited how the library is getting involved with the patrons. A-W-E-S-O-M-E.  I also heard today that some of the librarians at the suburban library near I94 are participating in 23 Things on a Stick.  I am so so proud of them!  I thought could feel the revolution approaching.

So this is what the intense photo shoot yielded: 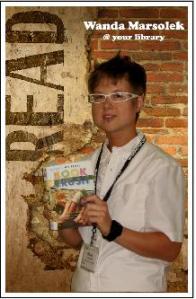 [Nancy Pearl, I hope you notice I am advertising for you, and this is not the first time, hook a sister up]

Tagged as 23 Things on a Stick, ALA, library, Nancy Pearl, READ

It could be fierce

Like Knittinmama I too saw Nancy Pearl speak today.  I learned a great deal about reader’s advisory techniques that I can’t wait to deploy once I have the appropriate job title.  As Knittinmama wrote, Nancy Pearl is not against Library 2.0, but she didn’t seem to love it like Garfield loves lasagna.  However, I love 2.0 which means that I would make a great side kick for Nancy Pearl.  A librarian with an action figure such as Nancy Pearl really needs a side kick.  Nancy Pearl, I could totally be your side kick, hook me up with an action figure, it would be totally “sweet.” (Nancy Pearl said “sweet” to me, she told me all the kids are saying it)  I didn’t have the heart to tell her,  the kids have moved on from “sweet” and thanks to Christian Siriano everything is now “fierce.”  See, she needs me to keep things current.  I was actually too nervous to say anything to her except to ask her for a photo.  If you don’t understand why I was nervous, it was kind of like meeting Justin Timberlake, Miley Cyrus, the Jonas Brothers, The Beatles, Angelina Jolie or David Beckham.  Don’t think I haven’t thought this action figure thing through.  My accessories would be:  a black pair of glasses, a white pair of glasses, a laptop, a digital camera, an ipod and a messenger bag to keep everything in.  My action, since Nancy Pearl has taken the shushing action, would be throwing up the peace sign.  Come on, remember in elementary school when you were about to leave the classroom, the teacher would raise her arm and make a peace sign.  At this moment all students recognized the peace sign as an instruction to be quiet.  The peace sign would totally be my action.  Just in case you can’t picture it, I have a visual for you.  Nancy Pearl and her side kick, not the peace sign action. 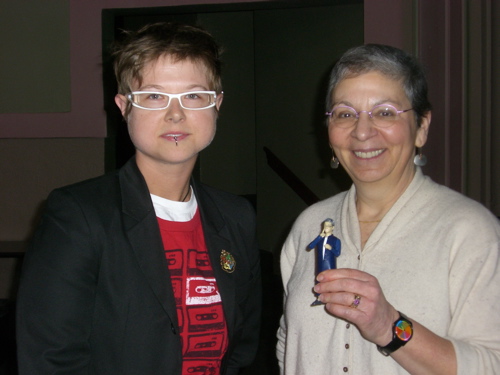 I am the one on the left without the action figure.  Nancy Pearl, I am totally up for the challenge.

On another note, Friday night I participated in the Grown Up Spelling Bee held at the 331 Club in NE Minneapolis.  It was a great experience, my first spelling bee ever and I am 28, I suggest everyone compete next year.  But as I was approaching the venue I saw this and had to take a picture to post here