This video does a pretty good job of showing what was experienced in the Sears parking lot in St. Paul on September 4th, 2008

RNC Day 4, can we have our city back?

The do gooders are back at it.  Link and continued discussion at this original link

Images from the anti-war march.  The march started at the Capitol marching towards John Ireland.

Love The Lawyers Guild in the neon green 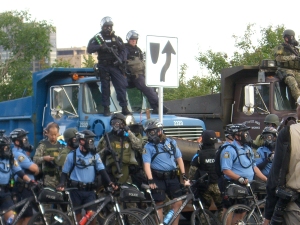 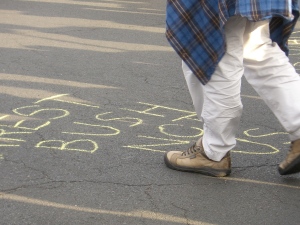 Chalking the intersection “Arrest Bush Not Us”

Once John Ireland was blocked, the crowd headed over to Cedar but was stopped at 12th

Sewer covers secured for the week 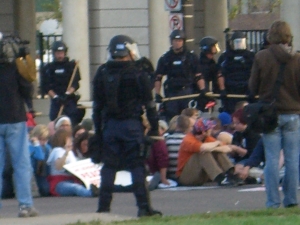 The first set of protesters to be detained.  The police surrounded the organizers of the Anti-War Committee. 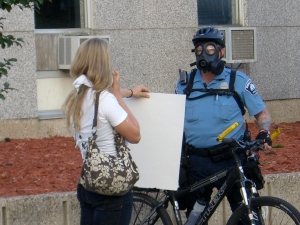 After the arrests and not getting anywhere on Cedar, the crowd turned around and headed towards Marion

The group took a right on University from Marion.  The intention was to find a route to the Xcel.  This became difficult as the overpasses were blocked

And then the concussion grenades and gas were deployed.  Couldn’t tell if the police gave a warning, the helicopters were low enough to drown out everything.  The police wouldn’t disperse the group in this manor unless they had given a warning, right?  The green cloud in the lower center is gas and concussion grenades.

Surrounded by police on horse back in the Sears parking lot.  Tried to go one way, police said to go the other way.  Turned around and the police on the other side were closing in.  Tricky, tricky.

Those unfortunate to be in attendance may think twice about doing that again.

Those poor horses.  No one asked them.